A filly from the first crop of multiple Grade 1 winner Bolt d'Oro sold for $1,200,000 to Spendthrift Farm to top the sale (video). Tom McCrocklin, agent, consigned the sale topper as Hip 48. The filly is a half-sister to four winners from as many to race out of the winning Not For Love mare Rich Love. She hails from the immediate family of Grade 1 winner Bounding Basque. Hip 48 worked a quarter of a mile in 20.1 during Monday's under tack show (video), the fastest quarter posted at the sale since its move to Gulfstream Park in 2015.

"I was pleased with the group of buyers that was in attendance and the level of activity," said Fasig-Tipton President Boyd Browning.

Triple Crown champion and freshman sire Justify was responsible for the sale's top colt, which sold for $1,100,000 to J. McCalmont, agent for M.V. Magnier from the consignment of Wavertree Stables, agent (video). Consigned as Hip 84, the bay colt is out of Grade 1 winner Appealing Zophie (Successful Appeal), making him a half-brother to six winners, including Belmont S. (G1) and Tampa Bay Derby (G2) winner Tapwrit (Tapit); Grade 2 winner and multiple graded stakes winner Ride A Comet (Candy Ride-ARG); and stakes winner and graded stakes placed Inject (Frosted). Hip 84 worked an eighth in 10.0 during the under tack show (video).

A quartet of colts rounded out the top five prices, including:

"Overall, the market was very similar to what we experienced in 2021," added Browning. "I think if we could lock in this market across the Thoroughbred industry through the rest of (the year), we would all say, 'Yes.'" 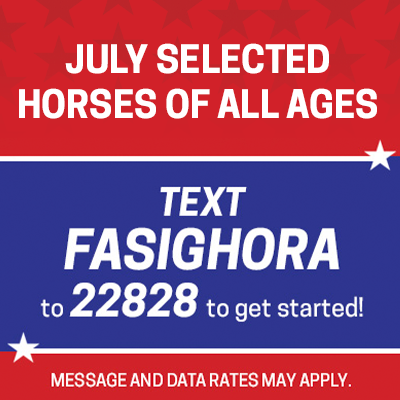