Fasig-Tipton hosted a vibrant edition of The November Sale, the company’s flagship selected breeding stock auction, Sunday at Newtown Paddocks in Lexington, Kentucky. For the second consecutive year, the single-session sale grossed more than $100,000,000. Thirty-one horses sold for $1,000,000 or more over the course of the single session, including 10 which sold for $2,000,000 or more.

Eclipse Champion Gamine (Hip 289), offered carrying her first foal by Quality Road, topped the sale when sold for $7,000,000 to Coolmore’s M.V. Magnier from the consignment of Hill ‘n’ Dale at Xalapa, agent (video). A five-year-old daughter of three-time Leading Sire Into Mischief, Gamine set records on and off the track. In May of 2019, Gamine set a then-record for most expensive two-year-old Thoroughbred sold at public auction in the state of Maryland when sold for $1,800,000 at the Midlantic Two-Year-Olds in Training sale (video). Eighteen months later, she blazed a new track record in the Breeders’ Cup Filly & Mare Sprint, covering 7 furlongs in 1:20.20 to defeat older fillies and mares by 6 ¼ lengths as she pleased. A nine-time winner in 11 career starts, Gamine scored seven times in graded stakes company, including in addition to her Breeders’ Cup victory: an 18 ¾-length victory in the Acorn S. (G1) in her stakes debut at three; a 7-length win in the Test S. (G1); and victories in the Derby City Distaff S. (G1) and Ballerina H. (G1) last year at four. She earned $1,771,500 on the track for owner Michael Lund Petersen and was named Eclipse Champion Female Sprinter for her efforts at 3 in 2020.

“It’s kind of a magical night,” said Fasig-Tipton President Boyd Browning. “Last year, we surpassed $100,000,000 in gross for the first time and it was one of those goals you dreamt about, but you didn’t think it was realistic to accomplish. We were fortunate enough to do it last year and we did it again this year. It was another remarkable sale.”

A pair of racing/broodmare prospects sold for $5,000,000 each as the sale second-highest priced offerings:

The first of these through the ring was the sport’s fastest Kentucky Oaks (G1) winner Shedaresthedevil (Hip 233), sold for $5,000,000 to Whisper Hill Farm (video). Hunter Valley Farm, agent, offered the five-year-old daughter of Daredevil as a racing/broodmare prospect. To date, Shedaresthedevil has won 10 times, including victories in the Kentucky Oaks (G1), La Troienne S. (G1), Clement L. Hirsch S. (G1), and five other graded stakes, and earned $2,777,458.

Also drawing a top bid of $5,000,000 was international Group 1 winner Campanelle (IRE) (Hip 272), purchased by M.V. Magnier from the consignment of Eaton Sales, agent for Stonestreet Stables (video). A four-year-old daughter of Kodiac, Campanelle won the Prix Morny (G1) in France at two and scored in the Queen Mary S. (G2) that year at Royal Ascot. Last year, she returned victorious to that prestigious meet, winning the Commonwealth Cup (G1). This year in North America, she added the Ladies Sprint S. (G3) at Kentucky Downs to her resume, making her a graded/group winner in three countries. To date, Campanelle has won six times for earnings of $1,070,417.

Another pair of Grade 1 winners sold for $4,000,000 each to round out the session’s top five prices:

Narvick International went to $4,000,000 to secure dual hemisphere G1 winner Blue Stripe (ARG) (Hip 316) from the consignment of Taylor Made Sales Agency, agent (video). A Group 1 winner at three in her native Argentina, Blue Stripe won the Clement L. Hirsch S. (G1) at Del Mar in August and came up just a nose short in a valiant effort the Breeders’ Cup Distaff (G1) on November 5. The five-year-old daughter of Equal Stripes was offered as a racing/broodmare prospect.

M.V. Magnier secured multiple Grade 1 winner Bellafina (Hip 264), in foal to Tiz the Law, for $4,000,000 from the consignment of Eaton Sales, agent (video). The six-year-old daughter of Quality Road was a multiple Grade 1 winner at two and carried her form at three, winning the Santa Anita Oaks (G1) by nearly six lengths, on her way to earnings of more than $1,600,000.

Bellafina was well represented earlier in the session when her first foal, a filly by Uncle Mo (Hip 128), sold for $1,350,000 to top the weanling portion of the sale (video). Paramount Bloodstock purchased the February foal, bred by Orpendale/Chelston/Wynatt & Kaleem Shah Inc., also from the consignment of Eaton Sales, agent. The price was the second highest ever paid for a weanling in the history of The November Sale.

“The excitement and the energy were palpable,” added Browning. “It was a great environment to sell some really quality horses. (Tonight) was absolutely a reflection of the quality horses we’re given the opportunity to sell. It was a fantastic horse sale tonight. We couldn’t be any more appreciative of the support and trust that people give us.” 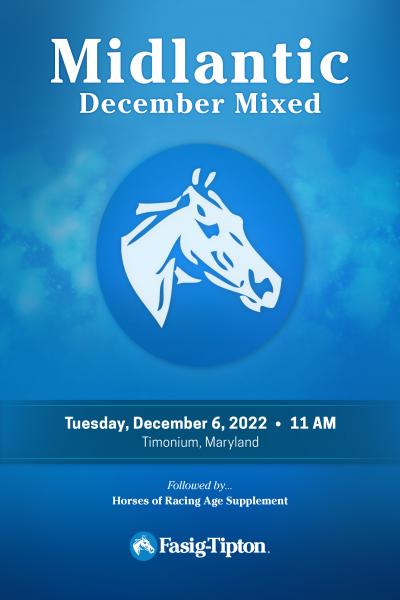