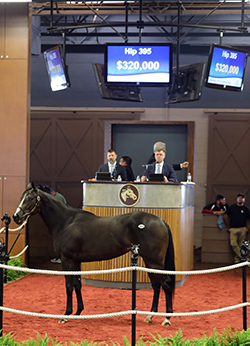 Hip 395, a filly from the first crop of champion Honor Code, sold for $320,000 at the Midlantic Two-Year-Olds in Training sale. The dark bay or brown filly was purchased by Oracle Bloodstock, agent for Hamid Radan from the consignment of Pike Racing, agent after working an eighth in 10.1 during the under tack show (video).

Champion Older Horse of 2015, Honor Code is best recognized for his wins in the Whitney S. (G1) and Metropolitan H. (G1) at 4, but also captured the Remsen S. (G2) as a juvenile, beating some of the finest in his generation, including current top-three second crop sire Cairo Prince and fellow freshman sire Wicked Strong. Honor Code earned more than $2.5 million with six wins in 11 starts.

This filly is a half-sister to eight winners from 10 to race out of the stakes placed winning Valid Expectations mare Quanah County. That mare has produced winning fillies like graded stakes winner Quantum Miss; Grade 2 placed Tonasah; stakes placed Kelwynne; and Appealing Honor, a debut winner by open lengths last month at 3.